Aliens Slot – Destroy the Queen and her Hive 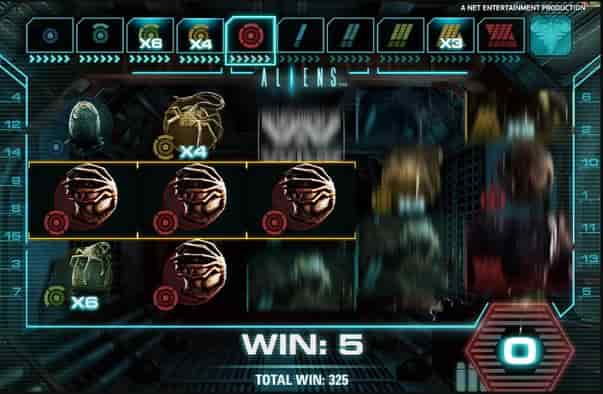 Aliens is a branded NetEnt video slot developed in cooperation with 20th Century Fox. Featuring 5 reels and 15 fixed paying lines, the game is played at 3 levels and offers loads of bonus features which get more rewarding as you advance up the levels. The maximum payout you can win while playing Aliens is 570,000 coins.

The Aliens slot machine is fully based on the 1986 SF horror movie of the same title. The main goal is to destroy the Queen and her Hive for the top payouts. The game boasts superior 3D graphics and realistic sounds contributing to the overall dark atmosphere of the game. All the symbols you need to land on paying lines to create winning combinations serve well the theme of the pokie as they are represented as monsters and alien eggs.

Before you set the reels in motion, adjust the bet value according to your preferences by selecting an amount of coins you want to wager and a coin denomination. You can wager up to 10 coins and choose their value from AU$0.01 and AU$1. The total bet you can place per spin can vary from AU$0.15 up to AU$150. Besides the spin button, the control panel also features the max bet and autoplay buttons allowing you to set your bet to the maximum coin amount and activate up to 1,000 automatic spins.

Wild appears on the reels 2, 3, 4 and 5 during the base game to complete your winning combinations by replacing other symbols. The base game is The Search level during which you have to collect multipliers from 2x up to 14x which will be displayed on the Alien Activity Meter above the reels. When you collect all multipliers you will enter The Encounter level. The highest multiplier will be applied to your wins at the second level. If your spins during this stage of the game don’t result in wins, the Alien Activity Meter will decrease. To reach The Hive level, you need to kill as many Aliens as possible. At The Hive level you have to kill the Queen and her Hive with eggs. You are awarded 5 re-spins during which you need to annihilate the Queen and her eggs. If you manage to do it, you will win a bonus of 240x your total bet.

To create a winning combination you need to land at least three symbols of a kind in succession on a paying line. The top paying symbol is the full grown monster awarding 1,000 coins for a five of a kind combination. You can win up to 570,000 coins while playing the Aliens video slot.